Family legend has it that my great-great-grandfather built a mill on this wee burn (photo below) at at Dornock, near Gretna, in 1826, then ran off (to England?) leaving my great-great-grandmother with child. The poem is an editor’s choice in the Hammond House ‘Survival’ competition hammondhousepublishing.comJohn A – my forebear,name-giver, border-crosserand promise-breaker who abandonedmy great-great-grandmotherand the bastard bairn he gave her –a fellow of craft it seemsmore than virtue. In the records he’sa millwright. What is it about millsand wanderlust? – I’ll have thatand a few other odds and endsworth keeping: thrumming wheel-music,metre in the slap-slap-slap of paddles,rhythmic and percussive, down and up,passion in the gush and leapof water from the millrace. And maybesatisfaction of a job well doneand a last look-backto comprehend every part workingas it should. With money sitting snugand proudly in his pocket. Moving on. 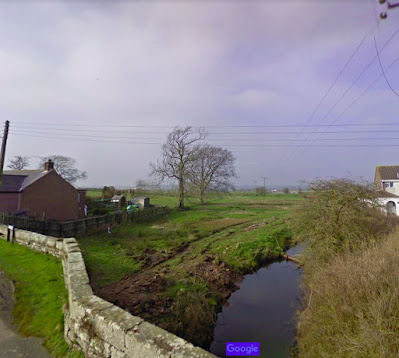 Posted by Donald Adamson at 10:19 PM No comments:

Shakespeare in Tuonela: towards a translation of Eeva-Liisa Manner’s 'Ofelia'

Notes.
1. I’m grateful to Nely Keinanen of Helsinki University for drawing my attention to the poem.
2. The chants of the witches in Macbeth are rare instances of the trochaic ‘Kalevala meter’ in Shakespeare’s plays.
3. My translation won an award in the 2018 Scots Language Society Competition for translation into Scots. I’d point out that the translation is fairly free, focusing on sound and rhythm rather than word-for-word exactitude of meaning.
4. There are echoes of Aleksis Kivi’s famous lines here: Tuonen lehto, öinen lehto! / Siell’ on hieno hietakehto, / sinnepä lapseni saatan. [Grove of Tuoni, grove of night / There is a fine cradle of sand / There I shall escort my child]

Posted by Donald Adamson at 2:40 AM No comments:

After the fireworks, fizz and zoom

the year wakes up

with a new head, arms, legs

and wings and wonders –

What kind of butterfly am I?

Posted by Donald Adamson at 2:11 AM No comments:

A couple of poems in 'Dreich' # 8. Thanks to editor Jack Caradoc and to Chrys Salt for pointing me in the Dreich direction! 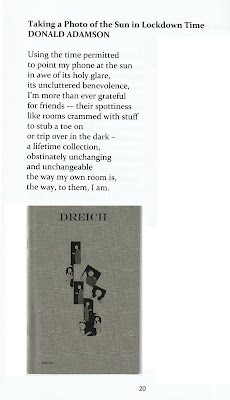 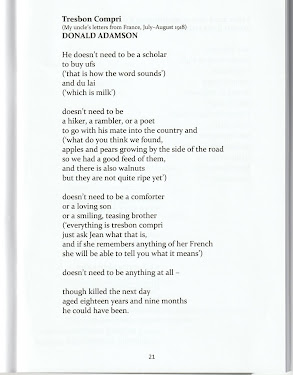 Posted by Donald Adamson at 6:41 AM No comments:

My poem ‘A Lang Wait’ was published recently in Scottish PEN online journal (theme ‘Patience’). Here’s me reading it, in Scots with English subtitles. 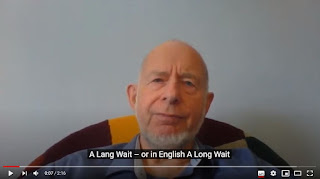 Ye micht wait lang. But keep the faith
for things will chynge for the better –
the lees will be seen throu
and the truth come oot suiner or later.
It's happent afore, it’ll suirly happen again.
It's a lang road – yit wi howp
and mair nor howp – gin ye speik oot

Posted by Donald Adamson at 6:39 AM No comments:

Posted by Donald Adamson at 2:52 AM No comments:

Donald Adamson
Donald Adamson is a poet and translator, currently living in Finland and Scotland. In 1995 he was awarded a Scottish Arts Council writer’s bursary. He has lived in France, the Middle East, and Finland, and has translated Finnish poems for How to address the fog: Finnish poems 1978-2002 (Carcanet/Scottish Poetry Library, 2005); also song texts for the Sibelius Academy, Helsinki, and for the World Music group Värttinä. He compiled 'A Landscape Blossoms Within Me', translations of the Finnish poet Eeva Kilpi (Arc Publications), and his collection 'All Coming Back' was recently published by Roncadora Publications. Donald co-founded the Scottish arts and literature magazine Markings, and has been a prizewinner in several poetry competitions. His poem ‘Fause Prophets’, which in 1999 won the Herald Millennium Poetry Competition, is buried in a time capsule under the walls of the Scottish Poetry Library. Contact via email donaldadamson at his Gmail address.